Use and Impact of Computers in Clinical Medicine


The project team developed a list of core open-ended questions for these semi-structured interviews. They were supplemented by spontaneous probes and follow-up questions to seek clarification or expansion of the participants' responses or to explore new relevant lines of inquiry raised by the participants. The same topics were explored in both interviews. In the second interviews, however, questions were worded to encourage participants to reflect on their experience with the EHR in the 8 months between the two interviews.

In addition to the specific questions on the first and second interview scripts, participants were encouraged to add observations and perceptions not addressed in the formal interview guides. Question topics and sample questions for the first and second interviews are presented in Table 1. The data were collected in two time periods: before installation of computers in the examination room and full implementation of the EHR and then 8 months later after installation and full implementation.

To maximize participants' comfort in responding to interview questions, experienced researchers RD and NW , who at the time of the research were not yet departmental faculty, conducted the interviews. Each interview lasted 30—45 minutes and was audio recorded. Participants were informed that the transcripts of the recorded interviews would be professionally transcribed and de-identified before being distributed to the project team.

All interviews were conducted privately in faculty offices or in meeting rooms. These summaries and spreadsheets were later discussed by the entire research team to formulate an overall thematic framework for the data analysis. Nextly, we developed, discussed and refined a code book for line-by-line coding using the qualitative data management software package, WEFT.

Code reports were then analysed to develop our final interpretation of the data. Four primary themes emerged from the data and are discussed in this paper: i patient privacy and confidentiality, ii physicians' skill in using the computer and the EHR, iii quality of patient care and iv physician—patient interaction. These themes will be discussed separately for the first and second interviews. We compared the findings for faculty and resident participants and found that the opinions of the two groups were highly concordant, so our presentation of the findings is combined. Possible breaches of patient confidentiality when using a computer in the examination room was a significant concern to physicians in the pre-computer installation period.

Some physicians reported that their patients were worried that their health information could be compromised. Physicians shared this apprehension and anticipated problems arising. One faculty member reported, I think people are concerned about privacy, about people finding out about them and stealing identity and stuff like that. While another stated, There are going to be some people who will be freaked out … It's important that we acknowledge issues of confidentiality.

EHR implementation had been long and gradual, spanning years where the EHR functions were only minimally used. The level of physicians' skills in using the technology varied greatly early in the study.

Use and Impact of Computers in Clinical Medicine

But I [also] actually communicate with my nurse fifteen, twenty times a day through Logician by flagging her. I don't use Logician for documenting the … note or the encounter. 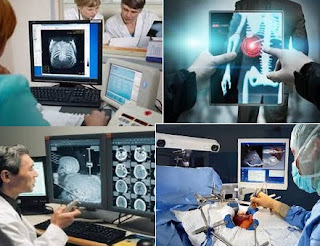 Some physicians predicted there would be negative effects associated with the quality of patient care. A common concern was that the physician would focus on the computer and not on the patient and that the encounter would be computer-driven, thus changing their style and pattern of care.

One faculty physician reported his observation of a fellow physician using the EHR: I notice that he goes through a litany of questions or issues, kind of runs down a laundry list … Is that real conversation? Is that medical information? Is that the computer driving the encounter? Or is that, you know, the encounter driving what's in the computer? There are pluses and minuses.


Despite concerns like this, most physicians also anticipated multiple benefits from having computers in the examination room, especially related to improved accessibility of patient data. Other benefits that physicians looked forward to included eliminating problems that resulted from the often haphazard organization of paper charts, misplaced charts, missing or misfiled elements within the chart and charts in use by other physicians.

Clinical education and the computer

Many physicians expected to see the elimination of problems created by the notoriously poor handwriting of physicians and the consequent difficulty of reading another physician's notes. Physicians also anticipated having the ability to track and graph parameters, such as haemoglobin A1c, children's growth curves and vital signs such as weight pulse and blood pressure, and hoped to adapt these capabilities as teaching tools to foster patients' involvement in managing their health. As one faculty physician explained, [I am] interested in the capacity of using the monitor screen as a teaching tool [to] show data about this is what your blood pressure has been the last year in a graph ….

Improved medication management including automated capability of the EHR to identify and flag drug interactions, to identify patients who are on a particular drug when there is a recall and to manage more effectively prescriptions for controlled drugs were other benefits physicians anticipated. A resident reported: Definitely [monitoring] narcotic records which we do a lot of just to make sure a patient is not getting narcotics too frequently. One faculty physician noted the value of prompts in preventing potential medical—legal issues arising from tests that should have been ordered but may have been missed.

Because right now we don't have any tracking system … and there's been numerous kinds of legal precedents and things that suggest that we are pretty much responsible for letting patients know when it's time to have their tests done, or if they don't get a test done we need to make sure they do it. A faculty member asserted: I think in terms of having automatic reminders, that's great.

It reminds me to bring stuff up that I might forget about … So I think that's going to help to provide good patient care so I don't forget to do—or at least mention—a screening test to someone … I'd rather have it pop up and ignore it than not pop up at all.

Personally, I like information, and I'll ignore things if I don't want to use it. One of the main concerns expressed by physicians regarding the presence of computers in the examination room was its possible negative effect on physician—patient interaction. A resident reported that, … in real time [to] try to document a patient encounter, potentially it might take away from the doctor patient encounter.

Physicians were particularly concerned about decreased eye contact. The placement of the computer and the need to type the note might make direct and indirect contact difficult. When charting manually, many physicians had developed an ability to write their notes unobtrusively while still interacting with the patient.

They feared that this would not be possible when using the computer. Physicians also expressed concerns about patients' reactions to their use of the computer. They predicted that patients would be offended by physicians' typing during the encounter and that physicians would not be giving undivided attention to their patients. Physicians also expressed concern about patients' possible negative reactions to typing the note rather than writing it by hand.

One resident stated that, … typing in front of the patients … I don't want them to feel like it's impersonal or something.

After the computers had been installed and physicians had become accustomed to using them in the examination rooms, physicians' initial worries about patient privacy and confidentiality seemed to have largely dissipated. Privacy and confidentiality were not cited as concerns by physicians in the second interviews. Instead, physicians noted that many of their patients seemed oblivious to the EHR; when patients were aware of it, they appeared to accept and appreciate it. In contrast to the concerns physicians expressed in the first interviews about patients' perceptions, physicians at the second interview felt that patients believed that use of the EHR signified that they were getting better care.

They feel like they are getting higher standard of care because we're computerized. Many physicians reported that they had had difficulty in learning the EHR system, although they noted that they had expected that the learning curve would be long and slow. Workflow issues that preoccupied them in the first interview were no longer mentioned in the second interview. Instead, the following comment typified physicians' attitudes: I didn't feel like it slowed me up significantly initially, which I was concerned that it would.

I guess we had been doing enough before that I had the routine down. You know, I think ultimately the … final switchover wasn't hard. Physicians who had to learn to be proficient using the computer in the examination room reported that they had one or two formal EHR-training sessions. However, their preferred way to learn the system was to experiment with it. They reported that the most efficient and effective way to learn to effectively use the EHR was not through formal training but to try it alone or use it with assistance from more experienced users as help was needed.

These physicians noted, [Training with technical support] was pretty useful [but] experimentation is number one and then being taught by colleagues. Anticipated benefits of more fully using the EHR on computers in the examination rooms cited by physicians in the first interviews were confirmed in their second interviews. Physicians said they appreciated the ability to track performance outcomes using the computer. I'll turn [the computer] around sometimes and say you look at this while I'm typing … They can see over my shoulder. The one good thing is that if they had lab work done you can just look it up which is a lot faster because the labs are never in the chart.

It takes forever to go find them. So that is faster. And that is better, and I think patients like that that you can just turn, look it up, and they're there, and it's faster. Physicians stated that more efficient access to information improved the quality of care not only in the outpatient setting but also for hospitalized patients. Physicians reported that while they had anticipated severe negative effects of using the EHR in the examination room on physician—patient interaction, this turned out not to occur, particularly for established patients.

Some physicians reported that they were able to maintain eye contact by appropriately positioning the patient. I always have them facing me … and I usually ask if they mind if I'm typing, and I've never heard anyone say they minded. As a result, large databases of clinical findings have been established, but the health care industry is only now beginning to use this data in clinical care innovation. So, what areas of clinical care innovation can realistically be expected in the next five to 10 years? It appears that the greatest effort in innovating clinical care will occur in three areas: medical error, computerized physician order entry CPOE , and disease management.

The answer is simple but alarming. Few hospitals want to admit they have a medical error problem. Instead, they ignore the problem and say they are doing as well as the next hospital. Furthermore, to admit to medical error would increase the possibility of increased legal liability claims, and no hospital wants to be known for providing unsafe care. It has been documented that 11 types of medical error occur in the hospital: emergency room, surgical, medical, medication, adverse drug reactions, nosocomial infections, patient falls, laboratory, maternity, device complications, and dicubiti.

What is interesting about medical error is that very little has been done to quantify it.